Come in Platform 5! Your Time is Up!

And Boy! Was it HOT!

It must have been the second hottest day of the year, and there was I dressed as an Oompa Loompa! Well, not really, but I was very orange with a blue hat!

Back in August, I was commissioned to take photos of the new Turnback Facility at Stevenage Train Station on behalf of Network Rail & The Spencer Group, who had managed to complete the massive undertaking ahead of schedule.

Arriving around 8:45am to meet the site manager, I was handed a hi-vis vest and trousers in a lovely shade of orange, together with a blue hat, and safety boots. I'd had to let the company know what size feet I am so they could order the boots for me - "oh, well, I'm really only a size 2, but I assume you won't be able to get safety boots in that size, so get me a size 3" I said. 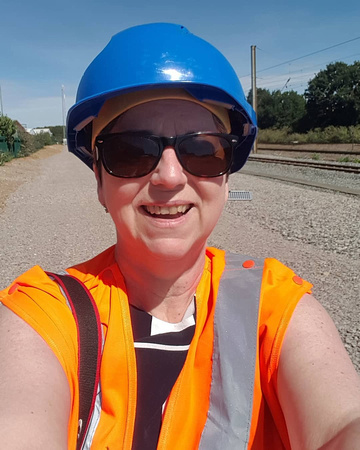 It was an interesting morning - getting some pics of the new additions to the line that allowed the Hertford trains their own line into Stevenage without blocking the way for the through-trains. I learned quite a lot about how things work on the train lines too, for example when the workers are walking along the sidings, they must wear their safety gear, and when a train is coming they always raise ONE ARM to signal that all is OK. "Whatever you do, don't wave at the train drivers with both arms - they'll think you are in trouble!" I was told.

It was about 30degrees - one of the hottest days of the year. I certainly admire all the workers who dress up in their Oompa Loompa gear and do a hard day's work in the heat! It's amazing just how much work goes into something that most people would look at and think "why does it cost so much? (it was £30m!)" or "why does it take so long just to add another platform?".  But, walking that stretch of line and being shown just what is involved - the new overheads that had to be installed, the trackbed, those little blue covered grates for access to the drainage along the line, the 130m-long platform, complete with approximately two kilometres of new electrified track and signalling, underground cables, a new-for-Stevenage buffer stop, and integrating the whole thing into the existing walkway; the number of hours involved is certainly justified.

Heading back to the site office to return all the safety gear, I asked "do you want the boots back?" to which the site manager laughed and said "no, you keep them. I don't think they'll fit any of my guys!!" Hahaha.

Check out more information on the Spencer Group's page HERE

And the next time you're waiting for the train, take a good look at all the infrastructure - it really is awe-inspiring.